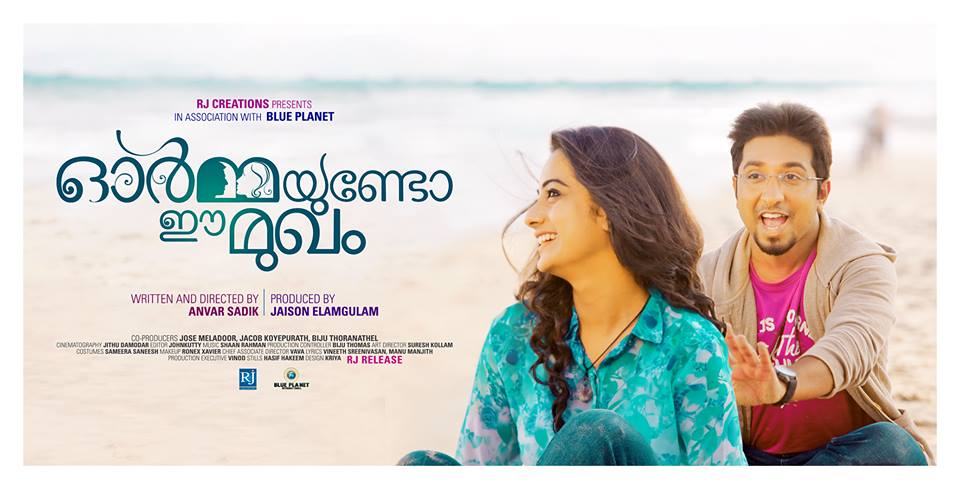 Vineeth Sreenivasan and Namitha pramod starring Ormayundo Ee Mugham is ready to release on November 14th. Ormayundo Ee Mugham is a musical romantic comedy. It is scripted and directed by debutant director Anwar Sadik. Movie portrays the problems in the life of a young couple. Aju Vargeese seen in prominent role in the film. After a long time actress Rohini is acting with Vineeth Sreenivasan.

The music is composed by Shaan Rahman. Shaan had earlier worked with Vineeth Sreenivasan on his directorial films like “Malarvadi Arts Club”, “Thattathin Marayathu” and “Thira”. Thattathin Marayathu was a musical mega hit. Ormayundo Ee Mugham includes 5 songs and a theme song. Movie is produced by Jaison Elamgulam in the banner of RJ creation in association with Blue Planet.

Updated after release of the movie

Ormayundo Ee Mugham story revolves around Gautham ( Vineeth ) who lives with his family and his lover Nithya (Namitha) who is a sand artist. Gautham takes care of the family business after the death of his father. He falls in love with Nitya without knowing her past.

Nithya is suffering from memory loss after a major accident and she can’t register memories longer than a day. She manages to live her days with the help of her personal diary, in which she keeps a record of the day’s happenings and future commitments.

Story takes to a different direction from there with how Gautham manages to find a place in her heart. Basic story line is feeble and do not offer much to the director to explore as an entertainer. Shaan Rahman’s music and the background score are well composed and fits to the story line. Both Vineeth Sreenivasan and Namitha Pramod performed well in this movie. Aju Vargeese and Soumya Sadanandan supported well to the storyline with their comedy contributions.

Ormayundo Ee Mugham is a breezy musical romantic story with debuntant direction by Anwar Sadik. Anwar Sadik managed to present movie in a pleasing manner. Though the movie lacks a strong and different storyline, one can say that its a feel good movie with some beautiful moments to remember.