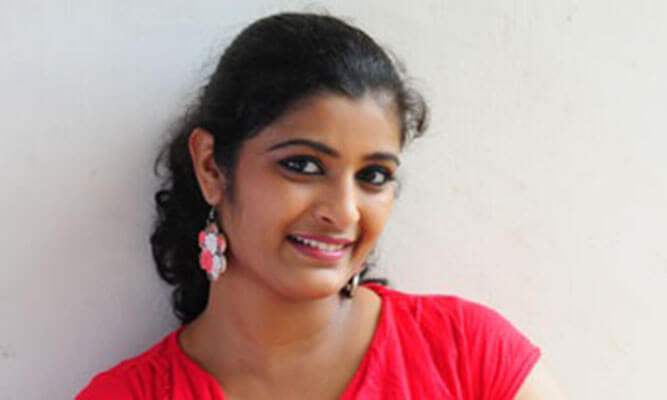 Shalu Kurian is now a familiar face to the Malayali audience through the popular serial Chandanamazha telecasted in Asianet. She hails from Kottayam district of Kerala. Currently she is settled in Trivandrum. She is a wonderful dancer. She is also trained in various forms of Classical dances right from very young age. Now she is a professional dancer and has done stage programs as well.

Shalu Kurian is also a model who has appeared in many commercial ads. Her first venture was an ad for Parthas textiles ad. Later her ad for Indulekha ad was much appreciated. Renowned director Sree Kumaran Thampi happened to see the Indulekha ad and Thambi called for his serial.

Shalu kurian debut movie was JUBILE a 2008 flick directed by G.George. Further she appeared in many films. Kabadi Kabadi directed by Sudhir and Kappal Muthalali directed by Thaha. In the same year her next movie Nanthuni was released.

Shalu Kurian started her career as a serial artist through the Malayalam serial Thingalum Tharangalum directed by Purushothaman. The serial was telecasted in Amritha TV. Further She was seen in the popular divotional serial Kadamattathu Kathaanar directed by TS Suresh Babu telecasted in Asianet. Shalu Kurian other serials are Kudumpa Police in kairali TV, Sarayu in surya TV, Indira in Mazhavil manorama, Chandanamazha in Asianet. Currently she is appearing in four TV serials in three different channels. Shalu decided to take up negative roles to find out whether she can do it well that leads to the character Rani in the serial Indira. Through this serial she had gained the cursing of many family audiences as her character is a negative one but Shalu is happy as she could do a different role through this serial.

Chandanamazha is telecasted in Asianet and it stands among the top serials by Asianet. It is produced by Sujith Sundar. In this serial Shalu Kurian acting a Negative role. Her character name is Varsha in Chandanamazha. She is modern and cruel girl. Shalu Kurian has become the most impressive actress in this serial. Shalu Kurian is able to do hundred percent justice to her character and the serial is whole heart accepted by the Malayali audiences around the world.

This eminent actress did get an award, Special jury award(negative role)for her performances in Chandanamazha from Asianet during the Asianet 2014 Television award.