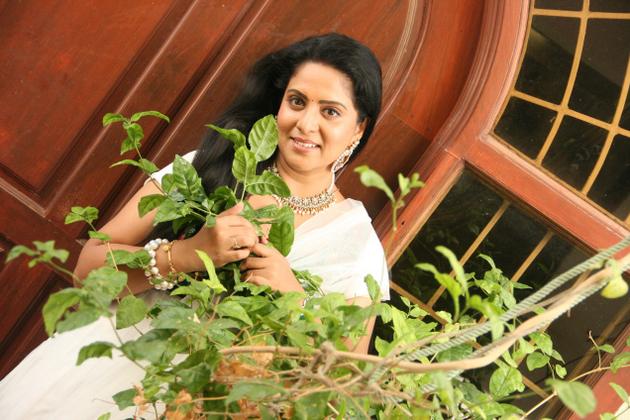 Roopasree is now very familiar to the Malayali audiences as Urmiladevi’ of the Asianet serial Chandanamazha. Her performance in the serial was much appreciated and made her very popular among malayali audiences. She is the most outstanding character in the serial. She is a non Malayali. Currently the actress is settled with her husband and children in chennai.

She has acted in Kannada,Tamil, and Malayalam films.She debuted in the Mollywood film Industry through the film Kallanum policum released in the year 1992. The movie was directed by the renowned directed I V Sasi. In this film main actors Mukesh, Manoj K Jayan, Ragini, Roopasree.

Later she appeared in the Arabikadaloram directed by S chandran. This movie had Sivaji and Silk Smitha in the lead roles. But she was not Identified by any as the films were Utter failures. Now she has made a come back to malayali Industry through the small screens.

In Chandanamazha Roopasree appears as Urmiladevi, daughter in law of Desai family. She is very strict person and intelligent also. Urmila always find out the mistakes done by Varsha. Urmila is portrayed as a brave woman. Her son Arjun married to Amrutha. Amrutha is not educated Urmila tries to help her daughter in law.

Her way of dressing, makeup and the accessories she wear had also added to make the character. As Roopasree can’t speak proper Malayalam, it is the dubbing artist Saira who gave voice to her character Urmiladevi.

She is acted in many Tamil films also. Some of her films were failures later she did appear in glamerous roles.Further she took a break in the film industry.Again she made a come back through serials.Currently she is doing three tamilserials.