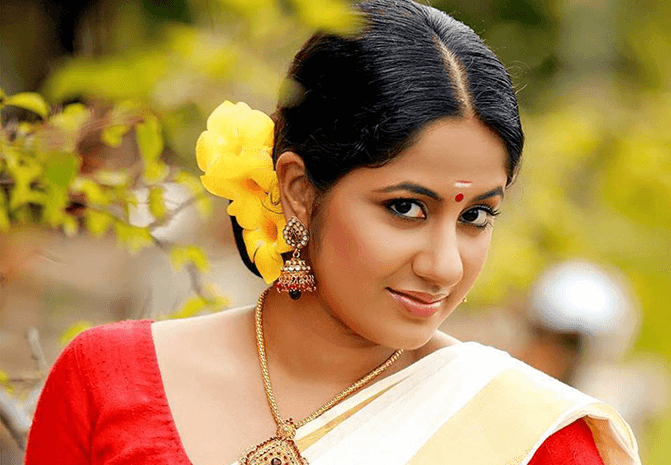 Jyothi Krishna is famous south indian actress, known through her recent characters in Jeethu Joseph movie ‘Life of Josutty’ and Ranjith movie ‘Nhan’. Jyothi Krishna is also trained in classical dancing. She is lucky to be part of many superhit movies. Now she did a major role in latest family entertainer ‘Life of Josutty’ from hit director Jeethu Joseph.

In ‘Life of Josutty’ Jyothi Krishna played as ‘Rose’ ( wife of Dileep ) who is a nurse in NewZealand. The story of the movie revolves around Josutty who is the son of Joseph and Shoshamma. Josutty’s is a middle class family.
Josutty falls in love with his childhood friend and neighbor Jessy. Because of financial problem, Jessy had to leave Josutty. Later Josutty marries Rose and migrates to NewZealand, where Rose works as a nurse.

Jyothi Krishna, born on 27th August 1990, hails from Thrissur district of Kerala. Her parents were settled in Qatar. She is the only child to her parents.

Jyoti Krishna came to limelight by being an anchor in Kairali TV. Later she acted in malayalam Album. Her first malayalm movie was “Bombay March 12” in which Unni Mukundan was in the lead role. Her other movies are “Last Bench” directed by Jiju Ashok, “Ithu Pathiramanal” directed by M. Padmakumar, “Dolls” directed by Shalil Kallur, “God for Sale” written and directed by Babu Janardhanan etc. Jyothi Krishna played role of Lakshmikutty in Rajith’s movie ‘Nhan’, where Dulquer Salman is the hero.