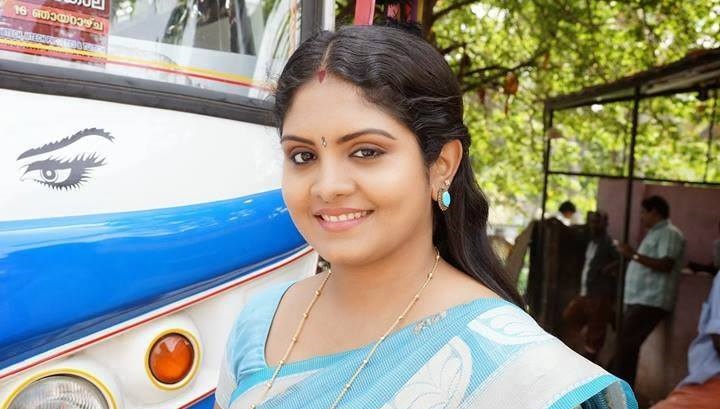 Gayathri Arun is a familiar face to the malayali audience. She is lucky to be recognized by all with her first venture itself. Gayathri made her debut in the field of acting through the mega serial named Parasparam telecasted in Asianet TV. It is the remake of most popular Hindi serial ‘diya aur baati hum’. Her character name is Deepthy. Deepthy is a bright and independent young girl who dreams of becoming a honest IAS officer with support from her family.

The story of the serial revolve around a family with mother and three sons.Gradually three daughter in laws will come in to their family and after the serial take a twist by getting in to the Incidents and happenings in their lives too.Gayathri is the first daughter in law of the family.

Deepthy is an obedient daughter in law of the family.Her performance in the serial was much appreciated and made her very popular among malayali audiences.she is the most powerful and strong character in the serial.

Gayathri is also good at music and has good singing talent. She came as the judge for the popular reality show in Asianet Idea star singer. Now she is getting popular and has attended many inaugural functions in various districts. She is likes modern attire too. But in this serial Deepthy is an very obediant daughter in law who wears only saree after marriage. But real life she did not have much sarees in her wardrobe and had to do special shopping for this serial.

She has no plans of getting in to large screen as of the next one year. She will be doing only the role of Deepthy now. She won best new face Heroine award from Asianet during the Asianet Television awards2014. Currently the actress is settled with her husband and kid In Alappuzha district. Her husband Works as a sales manager in a private company. They are blessed with a baby girl named Kalyani. The Sweet little girl is 4 year old.