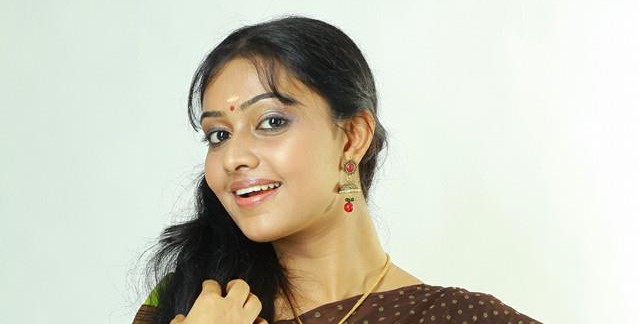 Sthreedhanam Serial actress Divya Viswanath is a malayali by birth was born and brought up outside the state. Divya Viswanath married to Ratheesh an art designer in Mumbai,Currently she is settled there. She has also appeared in Malayalam and Tamil movies and has also done couple of ad films. Divya has appeared in Parthas Textile ad. Her debut Malayalam movie was ‘Chandranilekku oru vazhi’ directed by Biju Varkki. It was a kind of award film rather than a commercial movie.

Later she acted in Indrajith directed by Haridas. The film was declared as a flop. Divya Viswanath made her debut in small screen through the serial Manaporutham directed by AM Nasser. Then she appeared in an Aroma serial Ammathottil telecasted in Asianet. Even though all her films where as flop, she is getting noticed through the serial Sthreedhanam.

Sthreedhanam is very popular Malayalam serial on Asianet. The story of the serial is centered around Divya. She is married to Prasanthan, Sethulekshmi’s elder son. She is not from a wealthy family. Sethulekshmi tries to create problems in the life of Divya and Prasanthan and ask for more Dowry. Prasanthan mom is very cruel to Divya. She is the most powerful character in this serial. Her performance in serial was much appreciated and made her very popular among malayali audiences.

Divya debut Tamil film was Ayyan directed by Kendiran Muniyasammy. In the same year she appeared in another Tamil film Pulivesham directed by Vasu. She has entered the Tamil small screen through the serial Pillai Nilla directed by Nimesh. The serial has been telecasted in Sun tv. She also won the most popular actress award from Asianet during the Asianet television awards 2014