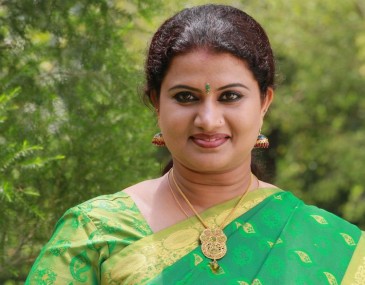 Devi Chandana is a Malayalam serial and film Actress. She acted in many TV Serials and TV shows. She is reputed for handling comedy and negative roles. She is familiar face to Malayali family audiences. She is able to Impress the audience with her outstanding performance as comedian in television shows and serials. She has done many stage shows as part of comedy skits around the world. She is one of the many faces who travels in foreign tours with Cochin Guiness and other mimics groups. Devi Chandana is acting in Flowers Tv serial ‘Nirupama Fans’ now.

Devi Chandana married to playback singer Kishore Varma. It was a love marriage. It was during a foreign tour Kishore and Devi got closer. She is a wonderful dancer too. She is a multifaceted person which is essential to be part of world tours. She is also good at music and has good singing talents. Devi Chandana’s famous program is ‘Comediyum Mimicsum Pinne Nhanum’. K S Prasad and Devi Chandana are the main comedy artists in this show. The Show presents us with features that are both extremely funny and raises awareness in various political and social causes in small way. It was airing on Kairali TV.