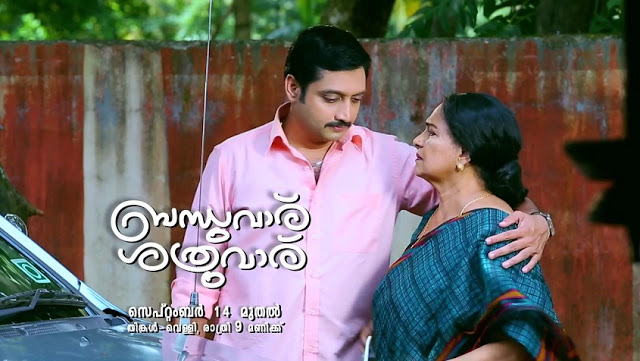 The serial Bhandhuvaru Sathruvaru will be telecasted in every Monday to Friday at 9.30pm in Mazhavil Manorama. Malayalam film and serial actor Sarath is doing major role in this serial. Divya Nair is playing as heroine. Divya Nair is upcoming serial actress. She has already acted in the serial Padasaram aired on Asianet channel. The serial Bhandhvaru Sathruvaru is directed by famous director Sreekumaran Thampi. It will be his first first project on Mazhavil Manorama channel. He had done one serial on Surya tv , serial name is Pattukkalude Pattu.

The story of serial Bhandhuvaru Sathruvaru is about ups and downs in a family of a gulf return malayali. An Expatriate come back home with a lot hopes and expectations, being a man surrounded with family members. The serial gives an insight to gulf people life. The story revoles around Hari who is returning from gulf after pravasi life. Actor Sarath is playing role of Hari. Mazhavil Manorama airing Sundari, Vivahitha, Dathuputhri, Manjurukum Kalam and Mayamohini right now.